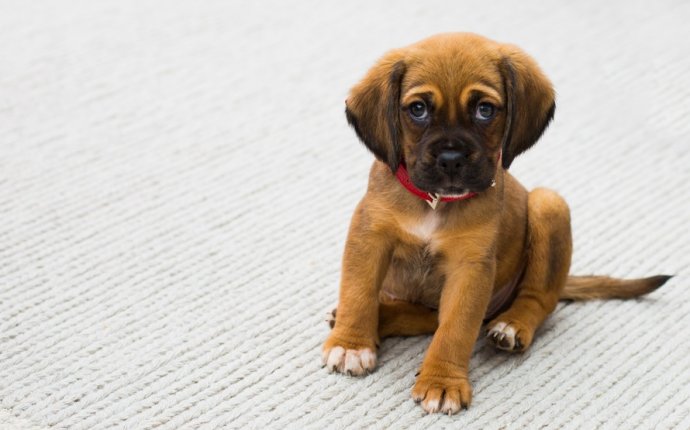 The rogue houseguest who inspired 10 Tips for Being a Good Houseguest had more of a lasting effect than I could have ever imagined. It seems one of my cats wasn't exactly stoked by her presence and as soon as she left kitty decided to, ahem, "cover" every last bit of her scent in the guestroom. I had no idea what he was up to until it was too late.

I'll start out by saying, I don't exactly love the carpet. It's brown, not the highest quality and it was here (and new) when I moved-in less than 2 years ago. It's serving its purpose and I can't, with good conscience, rip out something that could still be useful...even if it doesn't match what I have planned for the decor. I just thank my lucky stars it's only in the bedrooms.

To assess how bad the damage was, I moved everything away from the areas that seemed damp and my eyes actually watered from the ammonia smell! I mean, he (Mr. Mao, pictured above) must have been guzzling gallons of water in secret to get his bladder to produce so much liquid. I was thoroughly grossed-out and started having terrible visions that it had gone through to the downstairs unit (it didn't, thankfully).

The first step was to blot up as much of the urine as possible. I followed the instructions on a bottle of Nature's Miracle Just for Cats and saturated everything. I turned a box fan on and opened the window in that room, closing the door to keep the naughty feline out. Nature's Miracle recommends waiting up to 2 weeks for the enzymes to do their work, but I could tell after 7 days that one treatment wouldn't be enough. I seriously considered ripping the carpet out at this point, but it seemed like a waste to give up that easily.

The second step was to use the Bissell SpotBot carpet cleaner that I keep around for when one of the cats inevitably pukes. I used the automatic deep clean setting twice over each funky spot, along with their brand of pet enzymatic cleaner. When I was finished, I doused all the damp spots with Nature's Miracle again. I left it alone for several days to do its "work."

Next came the "sniff" test. Yup, I was on my hands and knees trying to detect any odor. I could still smell a little, so I decided to try vinegar this time as a last resort. I used about a half gallon of straight white vinegar from a spray bottle and saturated all the problem spots. I left that to dry for a couple of days. That actually worked! Problem was, the room smelled like a pickle factory. So, once I was sure the carpet was totally dry, I bought four boxes of baking soda and generously sprinkled it on the carpet. I left it on for a day, then vacuumed it up. Of course that led to dismantling my 6 year old Dyson to get all the fine powder out (because it totally lost suction after all that baking soda).

How to clean mascara off carpet?